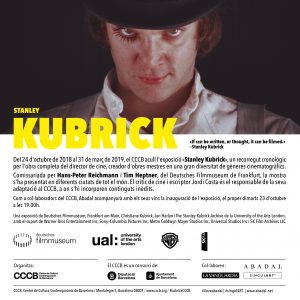 On October 23rd in the Centre for Contemporary Culture in (CCCB), an exhibition in honour of Stanley Kubrick was launched. It will run until the end of March 2019 and is named after the director. Visitors can follow a chronological tour of the cinema director’s complete works, which are masterpieces he created in diverse cinematographic genres. Abadal provided guests who attended the inauguration with a taste of its wines.