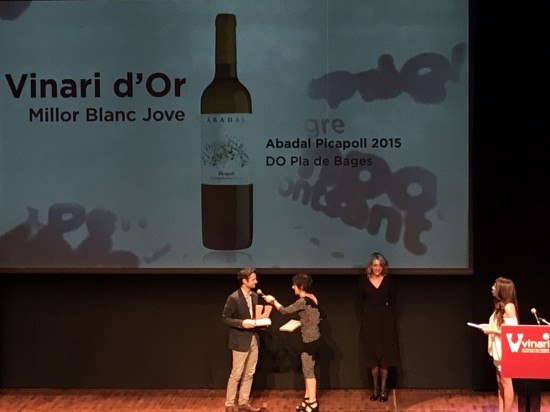 Abadal Picapoll won the Gold VINARI award for the best young white wine in the fourth edition of the Vinari awards which were held on Friday, 7th October in Vilafranca del Penedès. The same wine received the Special VINARI Gold DO Pla de Bages award as it obtained the highest score for wines from the same appellation of origin. These awards are presented by the Vadevi.cat website which selects and rates the best wines in Catalonia, and after just four years, these awards have become a point of reference within the sector.  Two Gold VINARI awards (one for the Abadal Picapoll and one in recognition of the appellation of origin, DO Pla de Bages) consolidate the Pla de Bages wine region as a major player in the VINARI awards which once again has honoured  the uniqueness of wines made with local varieties.

Abadal Picapoll has received wide acclaim in well-known publications such as the wine guide Guia Sin Mala Uva 2017, in which it scored 92 points. Abadal Picapoll is recommended in the September edition of the magazine Cupatges, and in the October edition of Cuina which describes it as “outstanding” in its wine section, El Celler.